I, Stevie Hogendoorn (1976), have been a researcher of life since I was a child. As far as I can remember I have been fascinated by people and observing them. What makes a person tick or why we do what we do was a core of my interest from the beginning. I also grew nito the habit of not walking to the expected beat of the drum and never bothered doing so. The role of outsider, observer, was more to my liking.

In my teens I continued that habit so I was an introverted outsider. I didn’t see the value of school and didn’t shine at all concerning my grades. I also had no clue about what to do when I finished school… except for being a musician. My father bought me my first guitar and I took some singing lessons. Later I formed a duo with one of my best friends and had some small successes here and there. However, I never was able to make music into a career. 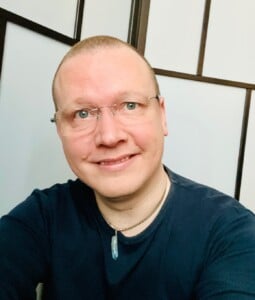 Around my thirties… that career in music wasn’t going to be ‘it’ and had no higher form of education. Now what? Coaching came to my attention and coaching started to be booming back then, so took on a course of Academic Coaching. Later an education as NLP coach. Communication, in the widest meaning of the word, became a huge passion alongside an in interest in our human psychology. Especially when it comes to what you hear, but isn’t said and discovering what is underneath the iceberg…

Later on (because of my uncle) I’ve gained an interest into communication that was of the non sensory perception. A whole new world opened up and I started a three year course of Mediumship (the development as a medium). I’ve experienced so many beautiful things that are hard to describe and that convinced me that we are not limited to just this body and mind. In the end I have been working and developing actively as a medium for around six years. In that era I also written my first novel (in dutch only) called ‘Before and Afterlife’.

And yet I have drifted away from my mediumship for a bit. I just didn’t feel there was enough attention towards personal development. I got interested in Advaita Vedanta (the eastern philosophy of non-duality; not two, but one). This appealed to me a lot because of that ‘I’ I always been researching. I grew an interested in a few of the popular names out there like Ramana Maharsi, Nisargadatta Maharaj, Papaji, Ram Dass and more of thi time: Mooji.

I perceived Advaita as extremely down to earth, yet gentle. It explained a lot, but to be honest, in the beginning it was confusing as well. I got it, but I kinda missed the part of how to practice or use it in daily life. at one point I considered a very lazy way of practicing spirituality. Though you can understand its philosophy, you don’t really have to do or change anything, because everything just IS. It seems to be all about excluding the mind, but the mind is something you will never be able to completely shut. Don’t get me wrong, there’s a lot of wisdom I have taken from it and from a psychological aspect as well. It has been totally worth my time and much of the knowledge I still use to day.

During this time I also became a licensed Mindfulness Trainer. This was also because of that practicing side I missed in the Advaita Vedanta philosophy. I just wanted to combine the best of both worlds. Or else it’s just knowledge…

Due to a specific course at work and the Covid-era, I ended up being stuck in my head and in a timespan of two years I was heading towards a Bore-out.

To be sure… A Bore-out is because of a lengthy time of working without any stimulants or enough work to keep you occupied. So my skills were on the shelf and fulfillment was absent. So you want to work, but the circumstances aren’t in your favor. Plus you can change as a person while your job stays the same as well. A Bore-out has all the symptoms of a Burn-out, just a different cause, still it drains you.

To cope I had escaped in live streaming/gaming. Sometimes having fun, may times to escape. I got completely stuck and though I had the knowledge, wisdom and the ability to self-reflect, I just couldn’t get out of my mind by myself.

Eventually I ended up in a Career coach program. There I realized, duhuh, I lost sight on a major piece of my sensitivity and intuitive side and skills. I realized that the image I had created about how my spirituality and my development should be, was fed by my insecurity, search for validation, being super hard on myself which I was still doing. Being hard on myself, as in turned out, was something I did in more aspects within my life.

At one point I figured out that it’s never either this or that, but AND this AND that. Though I knew this, it just got lost along the way. It’s not either Non-duality or Spirituality or Mindfulness… It’s and, and and then some more and. I had welcomed back and embraced my sensitive side and integrated it with my coaching.

From who I am today, I will continue to develop again and unite all present skills for the benefit of myself and mankind.

On the 6th of may 2022, I have lost one of my best friends, Jasper van Well, to cancer. This was a huge loss because he was one of the people that could follow me in the philosophical sense. We were so likeminded and both shared the passion of helping and coaching people towards a better life. He, like me, was a born coach. Shortly after is death, about a month later, my stepmom died as well. I started to yearn, long to introduce my mediumistic side back into my life. Especially after Jaspers’ wife shared some of the spiritual experiences he had in the last stage of his life… So I slowly started to work on my development again so I would be able to provide my services as a medium again.